A prayer of protection that you can pray for the unborn, against abortion:

Father, I come before You on behalf of every unborn baby in the United States of America (or whatever country you wish to pray for.

Proverbs 31:8 tells us to speak up for the helpless and for those who have no voice, so I plead the powerful blood of Jesus over each and every one of these precious babies and I declare that no weapon formed against any one of them will prosper.

Surround them with godly people who will love them and teach them Your ways so that they may be brought up in the discipline and instruction of the Lord. I declare that they will grow up and boldly speak Your word and do those things that You have called them to do.

Pastors, feel free to print these off onto cardstock and make them available to your church. 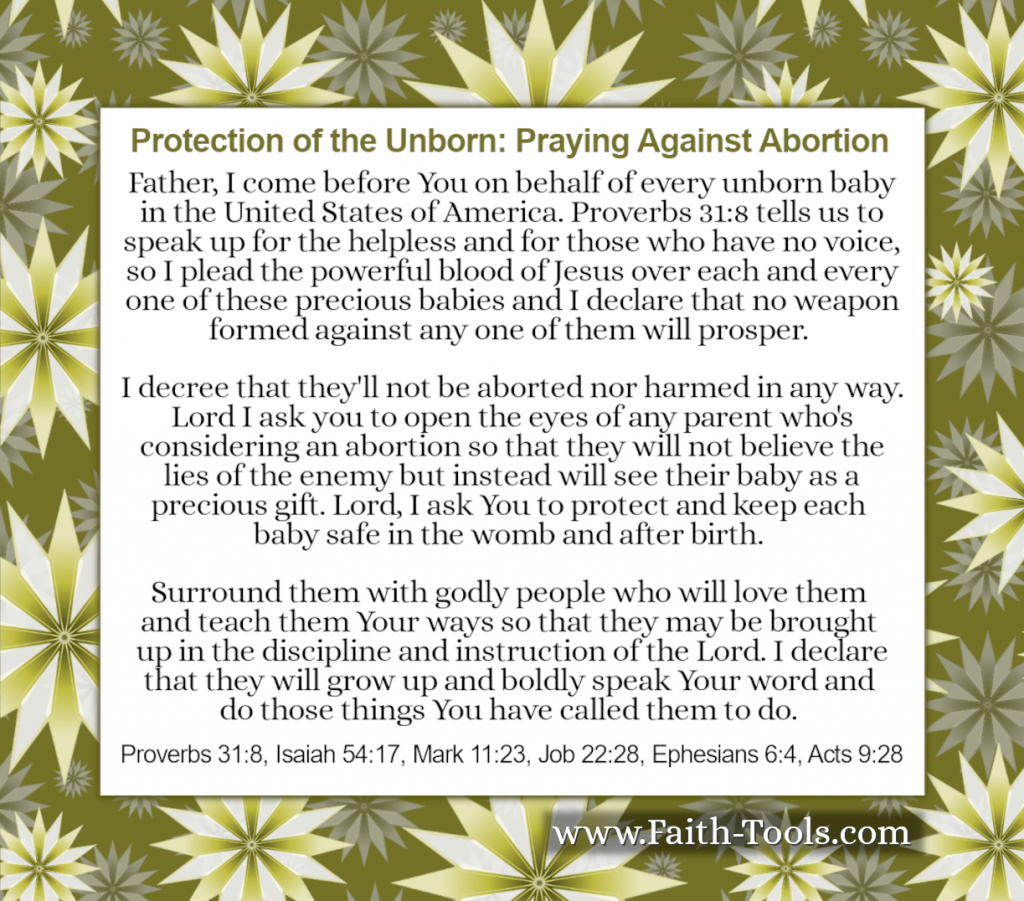 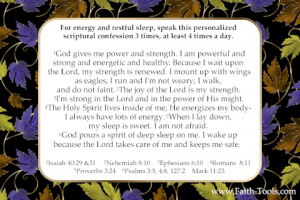 Scriptures on Sleep and Energy

For energy and restful sleep, speak this personalized scriptural confession 3 times, at least 4 times a day.

One of the most important things we can do to ensure our success is to use wisdom and listen to what God is saying to us concerning our life. Proverbs 4:6 lets us know that wisdom is the principle thing. Ephesians 5:17 says, “Don’t be unwise (foolish) but understand what the will of the Lord is.” Yes, the Holy Spirit will speak to you, but He may tell you to read a specific book or take a certain class or talk to a nutritionist.

Things aren’t always what they seem. For instance, a person may have constant headaches because of a poor diet or not drinking enough water. They may not need to be healed, they may simply need to make some changes in their diet. Or, maybe a parent has been having daily fights with their teenaged son and asking God to change the teenager. However, the root of the problem may be that they are not speaking their son’s love language. The Holy Spirit wants to reveal these things to parents.

Disobedience to God and His Word can keep us from experiencing God’s best. Many people struggle with forgiving those who have wronged them, not realizing they’re blocking the blessings of God in their lives. In Galatians 5:6 we see “…faith works by love” and in 1 Corinthians 13:5, “Love does not remember wrongs done against it.” (ETR version) We need to walk in love in order for our faith to work and we’re not walking in love if we’re holding grudges.

Finding and acting on the wisdom of God can save us time, money and grief. Putting in the effort to discover God’s will can prevent us from making high-priced mistakes, mistakes that can cost us our health, our family and money. I personally could have saved myself a lot of stress, time and many thousands of dollars had I just taken the time to do this.

Hearing and acting on the wisdom of God not only saves money and resources, but can also generate riches and wealth. In his book, How You Can Be Led By The Spirit of God, Kenneth Hagin talks about how in the early 1900’s, a business man went from making $5,500 a year to having over $30 million worth of assets by learning how to hear from God and tap into His wisdom by training and developing his spirit.

So before you start that business, or attend college or get married, take several hours, days or even several weeks if need be, to spend time alone with God and His Word and find out His wisdom concerning the matter.

As you are in this time of finding out God’s perfect will, keep speaking faith-filled words. Instead of saying, “I don’t know what to do,” say things like, “I have the mind of Christ so I always make the right decisions. In all my ways I acknowledge God and He directs my paths. I always hear and obey the voice of God.”

People may try to put pressure on you to make your decision quickly. You won’t be able to hear clearly from God if you’re under stress. If possible, get away from anyone or anything that’s putting pressure on you and get alone with God.

Here are 23 scriptural declarations for you to speak and meditate on as you seek the wisdom of God:

To read the previous post in this series go to, Power of Speaking God’s Word

Speaking God’s Word helps you transform your mind and get rid of negative thinking. You can only focus on one thing at a time and your mind can’t be thinking negative thoughts and speaking faith confessions at the same time. In this way we can “make” our mind think positive thoughts.

This leads us into our next point. Making confessions can lead to better mental and physical health. According to Caroline Leaf, author of Switch On Your Brain: The Key to Peak Happiness, Thinking, and Health, “Research shows that 75 to 98 percent of mental, physical, and behavioral illness comes from one’s thought life.”

Dr. Leaf talks about how each thought that we have, becomes a physical substance in our brain. Good, positive thoughts are seen as pink, healthy proteins in our brain while negative, destructive thoughts turn into twisted, harmful structures. These deformed proteins cause unhealthy reactions in our bodies that lead to stress, inflammation, and disease, decreased resistance to sicknesses etc.

However, it takes time to transform your mind. That’s one reason why long term consistency is so important. Replacing negative thoughts with God’s thoughts does not happen overnight. Dr. Leaf states that it takes a full 63 days to renew a thought and change it from negative to positive.

Whatever you think about yourself will become your reality. Proverbs 23: 7 says, “As a man thinketh in his heart, so is he.” You become what you think. Numerous studies show that there is a strong connection between self-rated or self-assessed health and how long people will live. In other words, if people see themselves as healthy (even if they aren’t actually healthy), they’ll live longer.

Meditation is one of the keys to bringing God’s promises into being. According to Joshua 1:8, meditation will help you to obey the Word of God, and cause you to prosper and have good success. What you meditate on gets inside of you and becomes real to you. You start believing that you can have what Bible says is yours. This causes your actions to change and line up with the Word of God- your way becomes prosperous. From looking up the word “way” in Strong’s concordance, I get the impression that it’s talking about habits- the way we talk and act. We establish habits and start doing things that cause us to be successful.

Some of the meanings for the Hebrew word for meditate in this passage of scripture are to mutter, murmur, imagine, talk, or utter. You can meditate the Word by muttering it under your breath, speaking (or reading it out loud) or imagining it.

Some practical ways to meditate the Word:

*Mutter it under your breath as you go about your day
*Speak or read it out loud
*Ponder it. What does this scripture mean to you? How does it apply to your life? What would change if this scripture was happening in your life?
*Imagine or visualize the promise already manifested in your life. See yourself living free from allergies. Imagine yourself living in your new home or being debt free etc.

As you do these things, it’ll start getting real to you and you’ll find yourself getting excited. You’ll be fully persuaded like Abraham, that what God has promised, He’ll do.

Using visualization techniques or mental images can be a great help in building your faith. While in the natural, there was no reason for Abram and his wife, Sarai to think they would ever have any children of their own, God gave Abram a mental image. The Creator of the universe took Abram outside and told him to look up into the night sky and count the stars, and told him that’s how many descendants he would have. (Genesis 15:5)

Before he received his first debt free airplane in 1976, evangelist Jerry Savelle, had his secretary, put a picture of an airplane on the back of his newsletter next to his itinerary, and write, “Jerry Savelle – coming your way.” He kept the newsletter on his desk, and every time he looked at it, he’d see himself on that plane.

This biblical principle is being used by people in all arenas of life. For example, Jim Carrey, before he was successful as a comedian and actor, would regularly drive to the top of Hollywood Hills in his old car and visualize himself as a successful, sought after actor. He wrote himself a ten million dollar check, dating it for Thanksgiving 1995 and wrote on it, “for services rendered.” Six months before the date, Thanksgiving 1995, he was paid 10 million dollars to be in a film.

In my own life while meditating on and declaring scriptures, I often visualize the promises of God manifested. One night my young son Michael was sick and had a fever. After I put him to bed, I read and reread Isaiah 53:4-5 out loud. I personalized it by saying, “Surely Jesus has borne Michael’s sickness, and carried away his suffering … by his wounds Michael is healed.”

For verily I say unto you, That whosoever shall say unto this mountain, Be thou removed, and be thou cast into the sea; and shall not doubt in his heart, but shall believe that those things which he saith shall come to pass; he shall have whatsoever he saith.

After reading it slowly over and over, thinking about what it meant, I started saying, “Because I believe, I can have whatever I say, so I say that ‘Michael is totally healed and when he wakes up in the morning, he’ll have absolutely no symptoms of sickness or disease about him.’ ”

I envisioned him getting up with a smile on his face, and asking for a bowl of cereal like he usually did. I did this until I was convinced that it was going to happen. It was so real to me, I would’ve been surprised if it didn’t come to pass. The next morning, when my son woke up, he was healed.

*This website contains affiliate links for a variety of products and services. I will receive a commission if you buy through my links. (You will not pay more for buying through me.) Thank you for supporting this website!